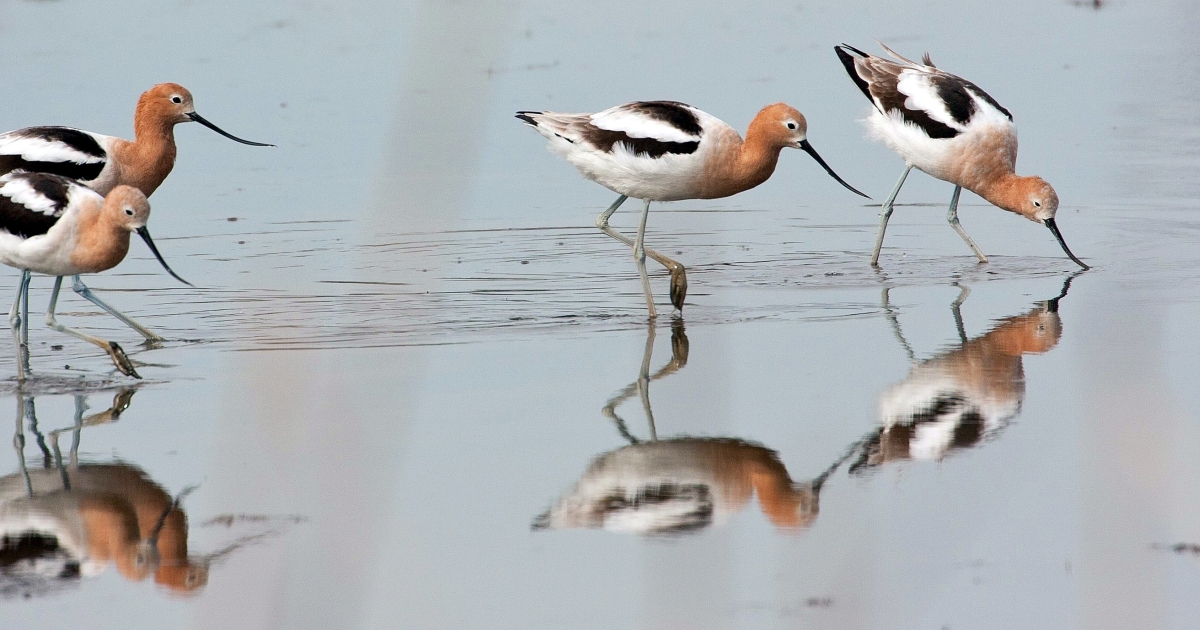 Some people gladly awaken at 4 am and drive hours to glimpse a rare Kirtland’s warbler. These folks can identify 200 birds by ear, by their songs and calls alone. They’ll fly cross-country to add a rufous hummingbird to their 400-species “life list.” Other people barely know a robin from a bald eagle, but they love to walk outdoors.

For both types of folks – experienced birders and newbies alike – national shelters are wonderful places to see birds in natural habitat.

Mike Carlo, a US Fish and Wildlife Service ranger, is an avid birder.

He keeps a mental list of refuges across the country that are well suited to people of varying birding experience.

“Refuges that are good for novices provide some combination of accessible trails, roads, structures and facilities offering opportunities to observe and hear interesting wild birds,” Carlo says. “These refuges tend to have knowledgeable staff and online resources that welcome casual birders; offer loaner field guides and binoculars to visitors; and schedule introductory experiences that highlight year-round or seasonal birdlife.”

One great place for newbies is New Mexico’s Bosque del Apache National Wildlife Refuge, where, Carlo says, “autumn is an unforgettable waterfowl and crane spectacle.” A highlight is the annual Festival of Cranes in November.

Another excellent spot for beginners is Utah’s Bear River Migratory Bird Refuge. The 80,000-acre refuge has a “great visitor center, a 12-mile auto tour loop and birds everywhere – the scenery is spectacular,” says Carlo. “From shorebirds to waterfowl to raptors to waterbirds like pelicans, ibis, herons and swans, it’s a great place to see many species during a single visit throughout the year.” This video introduces the refuge.

Another favorite for newbies year-round is Washington state’s Billy Frank Jr. Nisqually National Wildlife Refuge, which has an outstanding boardwalk and several walking trails. “One of the big draws to the refuge for the past 10 years or so has been a pair of great horned owls,” says Michael Schramm, a former ranger at the refuge. “They have been breeding here reliably all that time, and typically nest in a place that’s visible from trails. But there’s no guarantee that will go on indefinitely.” More than 200 bird species visit the refuge annually.

“Experienced birders often visit refuge to improve their birding skills, to have the chance to observe uncommon birds and perhaps add new species to their life lists,” says Carlo. “They tend to choose birding locations that provide widespread access and excellent bird habitat, and are near other birding hotspots.”

For avid birders, Ohio’s Ottawa National Wildlife Refuge is hard to beat. The 6,500-acre refuge is a slice of marshland on the southwestern shore of Lake Erie along a major bird migration corridor. It is adjacent to the state of Ohio’s Magee Marsh Wildlife Area. Ottawa Refuge is “a great place to visit during spring migration in concert with a trip to Magee Marsh,” Carlo says. “For a special treat, you might consider visiting during The Biggest Week in American Birding Festival in May, with close-up looks at scores of colorful, migrating songbirds and nearly as many friendly, interesting birders.”

Another great spot for committed birders is Tule Lake National Wildlife Refuge in California near the Oregon border. The 12-mile auto tour road “rewards birders with looks at birds in wetlands and managed farm fields,” Carlo says. Tule Lake Refuge is near five other good-birdwatching refuges in the Klamath Basin.

For avid birders with the wherewithal to get there, Alaska Maritime National Wildlife Refuge is extraordinary. It attracts birds from Asia and North America. “It’s not easy to access. But for those who can get close to some of the islands by boat, there are some wonderful species of seabirds and other Alaskan specialties to look for – either on land or on the water,” Carlo says. “One of the best to experience some of what the shelter and surrounding area has to offer is to attend the annual Kachemak Bay Shorebird Festival in May in Homer. First-time Alaska visitors can really add to their life lists while having fun with birders from around the country.”

Newbies and experienced birders alike could enjoy two refuges near each other in south Texas. Newbies appreciate Santa Ana National Wildlife Refuge for its wonderful visitor center, compact trials and a bird-feeding station that attracts colorful species. For experienced birders, there is nearby Laguna Atascosa National Wildlife Refuge, where more than 400 bird species have been documented, including some rarely seen elsewhere in the United States. “With more species observed at Laguna Atascosa than at any other refuge, this is theoretically the best possible place to increase your life list,” Carlo says.

A third refuge pair is along the Mid-Atlantic coast. Edwin B. Forsythe National Wildlife Refuge near Atlantic City, New Jersey, has an eight-mile auto tour loop that provides newbies a chance to see waterfowl, waterbirds, gulls and terns and shorebirds in spring and fall. For experienced birders, Prime Hook National Wildlife Refuge, 160 miles away in Delaware, is famous for “its spring shorebird migration spectacle, including red knots, sanderlings, dunlin and other species refueling on horseshoe crab eggs,” Carlo says. “It’s one of my favorite refuges for bird photography.” It’s also near two other fine birding locales, Bombay Hook National Wildlife Refuge and the state of Delaware’s DuPont Nature Center.

As world-renowned birder Kenn Kaufmann has said, “national habitat shelters protect some of the most amazing habitats for birds and other habitat in the USA. These public lands represent a treasure for all Americans.”

Find a National Wildlife Refuge Near You + Plan Your Visit