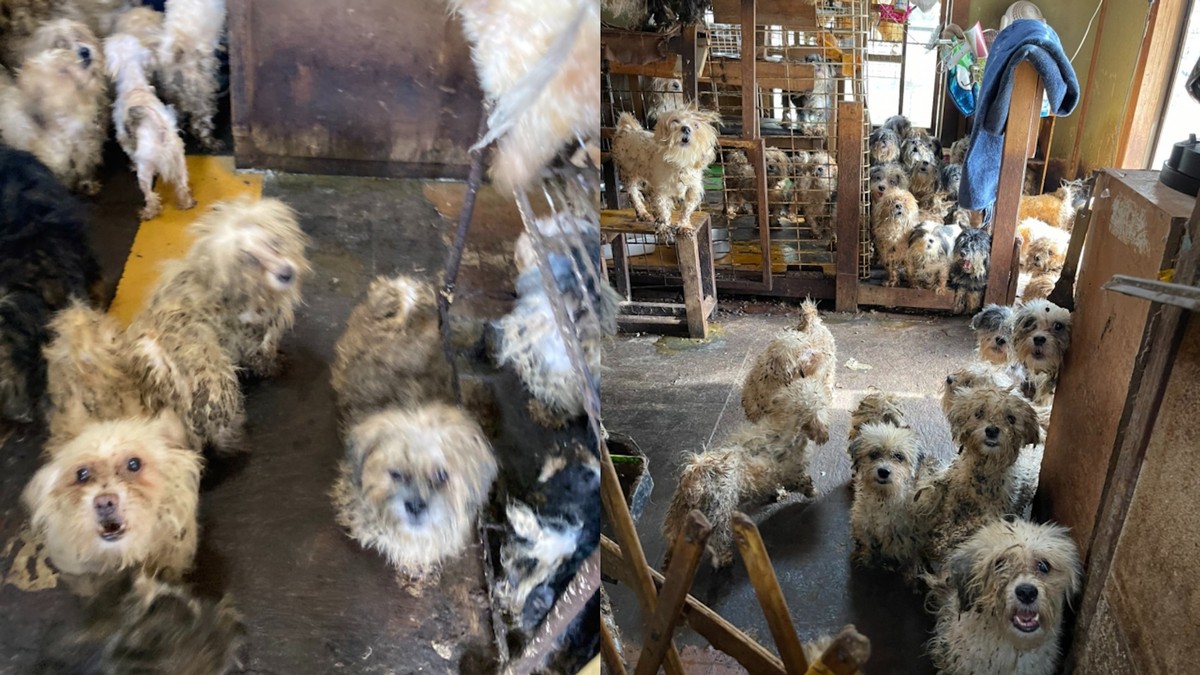 The dogs, emaciated and covered in feces, even bore scratches from fighting with one another. Photo: Courtesy of Animal Life Matters Association

A pet owner was charged with animal abuse on Tuesday for keeping her 221 dogs in grotesque conditions, such as letting them fester in their own feces in her cramped home.

The 63-year-old woman, a resident of greater Tokyo’s Chiba prefecture, reportedly lived alone with her pets. Neighbors could smell the dogs’ feces and urine in the air floating in through their homes, often forcing them to close their windows to block the stinch. The pets’ howls could also be heard from all hours of the night, and those who lived nearby could see that many of the dogs were suffering from skin diseases. Their eyes red and inflamed, the dogs also had their own feces sticking to their fur.

“This is a clear case of animal abuse,” Rie Kaneko, the president of Companion Animal Club Ichikawa that helped rescue the dogs, told VICE World News.

“They were emaciated and covered in scars, even on their eyes, because they were fighting—some have actually killed each other,” she said.

In Japan, animal rights has been at the center of growing concern after recent cases of animal hoarding. In November 2020, health officials found 164 emaciated and parasite-infested dogs in one man’s home located in western Japan. A year later, local government officials in southern Hyogo prefecture would find 250 cats, kept in one man’s two homes.

Animal hoarding has become such a big concern that it was a key issue in Japan’s general elections last fall. Pushed to increase protection for animals, officials revised the animal protection law and imposed a prison sentence of up to a year or a fine of up to 1 million yen ($7,433), if someone is found abusing animals by subjecting them to poor living conditions or hoarding them.

Although Yumiko Takemoto, the vice president of Animal Life Matters Association, an animal rescue shelter involved in the case of the 221 dogs, was never allowed into the owner’s home, she described the house as “overflowing” with dogs.

“If you peered inside her home, you could see dogs on top of each other near the front door, in the hallway, all the way up her stairs, and I wondered if there was even a place for a human being to eat,” she said.

Takemoto said that on all the three occasions that she visited, the owner was adamant about not giving up her pets. “We would offer to take some of the dogs and would let her choose which pets to give up, but she’d say she was tired—she refused to give them up,” Takemoto said.

According to Takemoto, the pet owner never intended to let her pet population get out of hand. Ten years ago, the woman only had a handful of pets, but the animals just kept reproducing.

Takemoto said the rescued dogs are now in the process of finding new homes. “Though they were once covered in feces, people are still interested in adopting them,” she said.